Zillow recently sent a cease-and-desist letter to the owner of one of my favorite parody sites. McMansion Hell, marvelous brainchild of architecture critic Kate Wagner, is a trenchant look at the sprawling manors that dominate wealthy suburban towns. Unfortunately, due to the legal imbroglio, McMansion Hell is down right now, but you can still visit its Facebook page or read this recent article from the Washington Post.

Zillow’s letter to Wagner includes multiple claims, including violation of its site’s terms of use and copyright infringement. 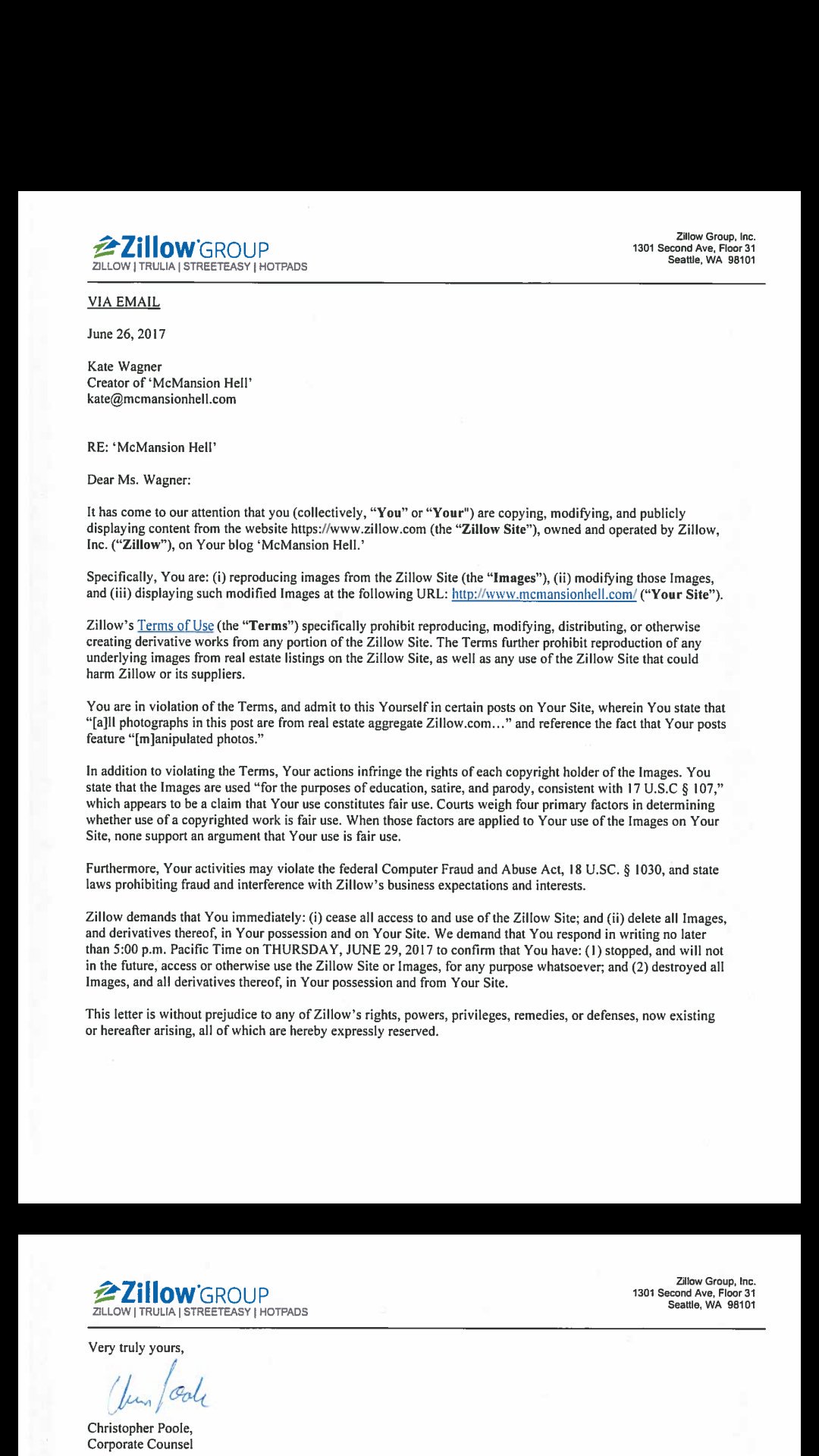 Somebody help me, Zillow is threatening to sue me

Copyright infringement, isn’t any of Zillow’s business. (Other than a possible concern for secondary or contributory infringement – but Zillow’s counsel didn’t go there, so I won’t either.) Zillow doesn’t create its photographic content, so it (generally) does not hold copyrights in images of homes on its site. Copyright could belong to (a) the photographer, (b) the photographer’s employer, (c) a real estate agency or (d) another signatory, depending on the contract(s). Instead, Zillow acquires its images from from various MLS (“multiple listing services”) websites via license. Well, most of its images: Zillow recently paid out $8.3 million when it was found guilty of copyright infringement by a Washington district court. Zillow doesn’t hold the rights to the images in question, so assertions of infringement are just sanctimonious finger-wagging.

Zillow then makes a related – but outrageous – assertion:

You state that the Images are used “for the purposes of education, satire, and parody, consistent with 17 U.S.C. § 107,” which appears to be a claim that your Use constitutes fair use. Courts weigh four primary factors in determining whether use of a copyrighted work is fair use. When those factors are applied to Your use of the Images on Your Site, none support an argument that Your use is fair use.

I beg to differ.

McMansion Hell is a parody site. Parody is a highly protected class of speech that enjoys special consideration in a fair use analysis, and is widely considered an evidently transformative purpose.

Wagner’s parody is visually obvious: as seen above, the original MLS-distributed photographs are extensively overlaid with derisive commentary that creates a specific parody of each home, as well as a broader social commentary. Wagner skewers the specific houses depicted and the manner in which such houses are described in marketing materials. She unpacks the professional jargon employed by realtors, explains the practical effects of poor architectural choices, and pokes fun at the homeowners’ decorating choices. The original images were created to attract buyers, but Wagner repurposes them repulse readers. Her textual additions transform serious images intended to appeal into comedic images designed to amuse. The total effect is a specific parodic commentary on each house, but also a broad parodic commentary on upwardly mobile homeowners, the real estate industry, and the American culture of indulgence that gave rise to such monstrosities.

Whether specific or broad, courts have consistently ruled that parodists’ commentaries must be allowed to use enough of an image to “conjure up” the pre-existing work in the mind of a viewer. And “enough” usually means “quite a lot.”

Zillow’s letter is a transparent attempt to censor a sharply-drawn parody of its recycled content. The company’s attention to copyright is inappropriate; if the copyright holders want to contact Wagner, that’s their business, not Zillow’s. And the denial of Wagner’s fair use right is simply absurd.

A gentle reminder: This post is not intended as legal advice and should not be used as such.