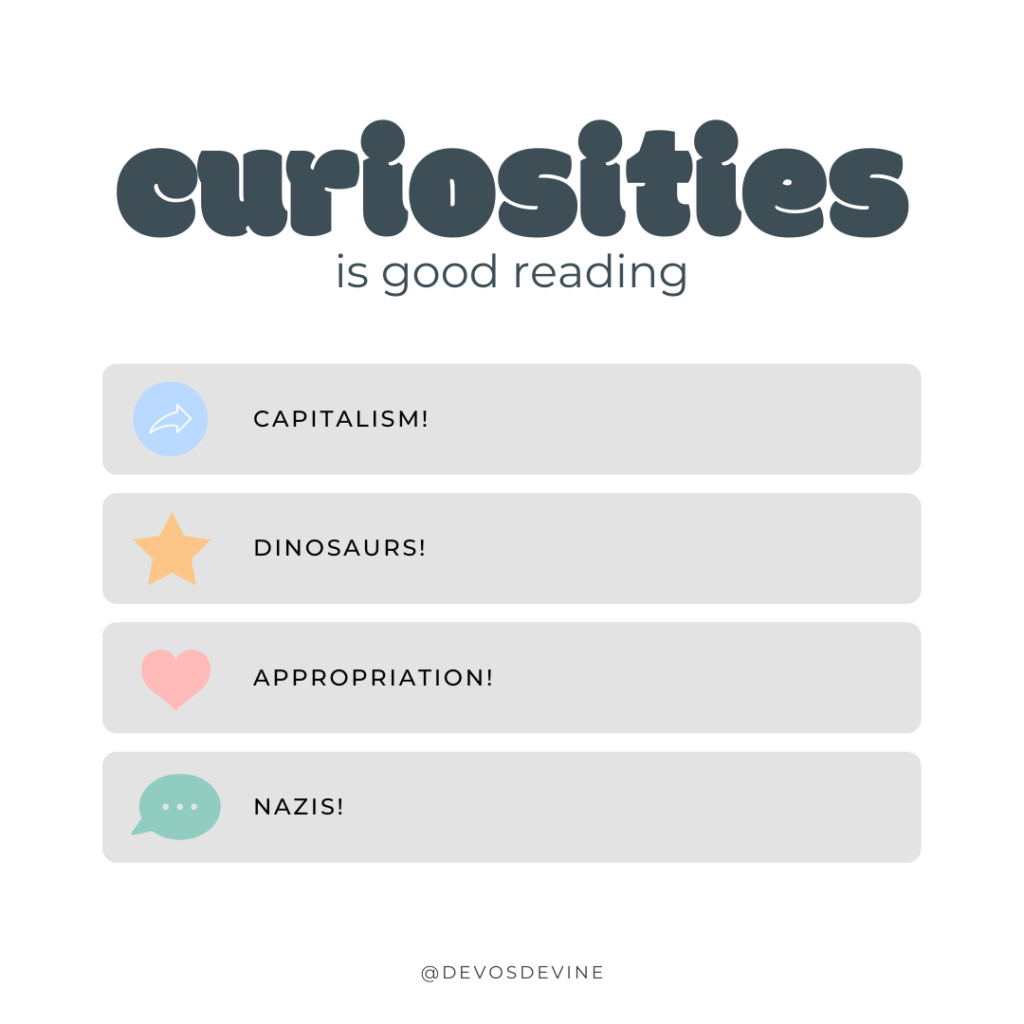 The best things we found this week.

“Like kids in the candy shop, we are continually persuaded to spend money we don’t have on things we don’t need—to create impressions that won’t last on people we don’t love. In the meantime, the poor still suffer. And the planet reels from our indulgences.”

I’m anti-capitalist. But I’m not a socialist. If you’re not an avid reader of Silvia Federici or Jenn Armbrust, that might sound a little confusing. This is a fantastic, accessible introduction to the problems of late capitalism. Let the parts about shame and anxiety really hit you in the gut.

“Yabba Dabba Doo!” reads the sign on Florence Fang’s 10,000 square foot property. Since purchasing the home in 2017, Fang has adorned the property with Flintstones-themed decor, including 15-foot dinosaur sculptures. To some, it’s an attraction; to others an eyesore. In 2019 the city sued Fang, claiming her landscaping choices are a “public nuisance” and insisted that the homeowner should have sought approval for landscaping changes. Fang counter-sued to defend her aesthetic choices. After two years of standing up for her cartoonish home, Fang settled. She can keep her dinos, but agreed to apply for permits for any additional alterations to the home’s exterior. Beauty is in the eye of the beholder. 😉

Father-son duo Michele and Marcelo Di Pierro were sentenced to jail time for reproducing the Supreme logo and selling items as if they were authentic. A London court said the duo “hijacked every facet of the company’s identity and plagiarized it.”

Truly helpful guides to cultural appropriation are few and far between. Author Tina Charisma’s means to differentiate the two is truly useful: “appropriation either mocks or ridicules a culture, or involves copying the influences, be it music, lifestyle, or fashion, and using it for personal gain.”  Appreciation, by contrast, involves understanding and siting oneself in a historical context. If we engage in research, learn the object/custom’s history, comprehend its intended use, and can articulate its origin, then we are more likely to act respectfully.

The Dutch government will start an inquiry into its national collection, “aim[ing] to return as much as possible of the art looted by the Nazis…to its rightful owners.”

Why is this so exciting? It’s an important shift in the Netherlands restitution action! Typically, a legal claim must be made by the heirs of the owner of a certain artwork, but now the artworks may be investigated and returned without specific claims. That opens the door for the “heirless art” program, in which unclaimed works will be given to a Jewish Heritage Institution.

Legally, this is fascinating. First, the state is taking action, so it’s more like a criminal case. Second, the works are being treated like cultural property rather than personal property. The Dutch are recharacterizing the nature of Nazi theft!