Can My Kid Dress as Moana? 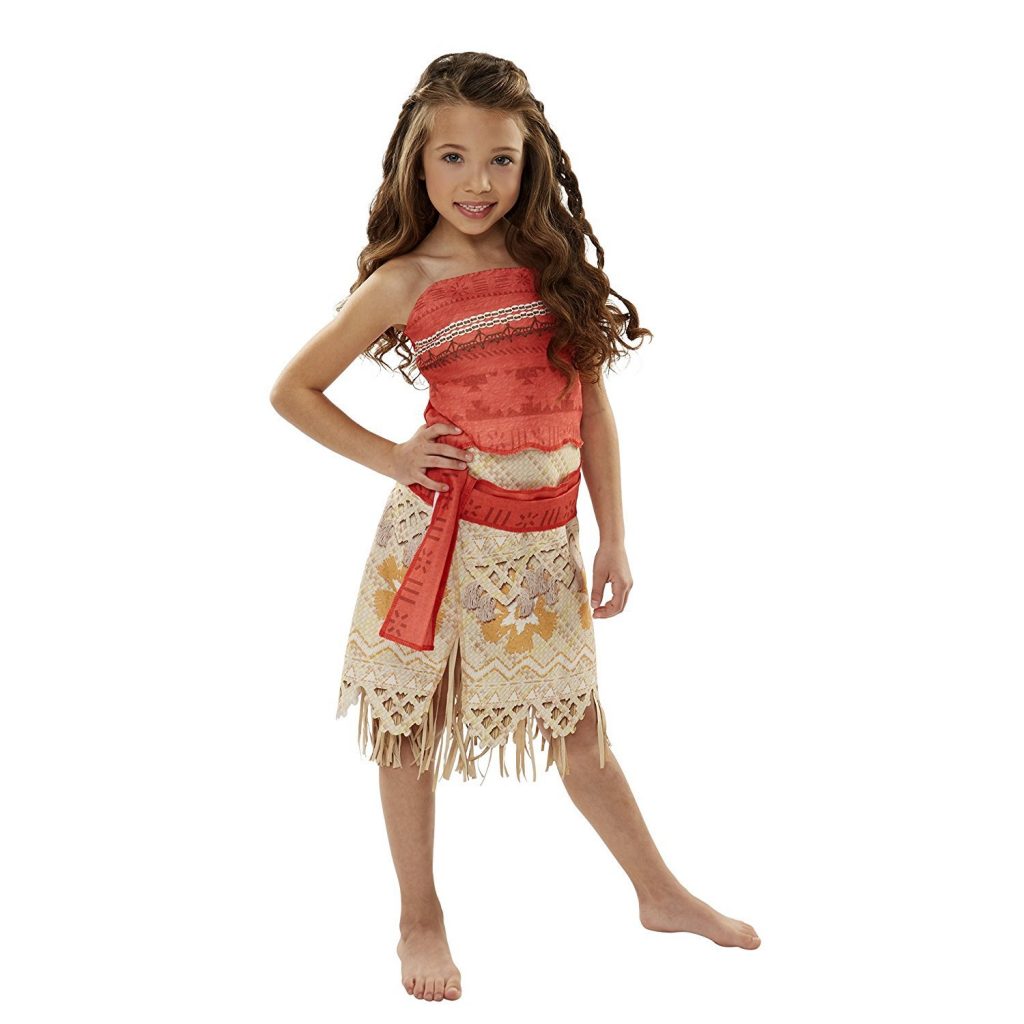 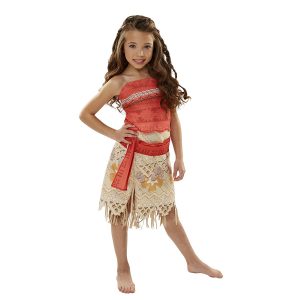 My friend posted this USA Today article to Facebook yesterday, sparking a great conversation among parents, who asked a series of excellent questions. A Moana costume doesn’t seem like a hard question to me, but I got a PhD in appropriation.

And now I’m going to use it.

“Is it OK for a white kid to dress up as Moana for Halloween?”

Polynesians, as well as members of other cultures, are right to state that “my culture is not a costume.” However, Moana is a character, not a culture.

Moana is not exclusively an emblem of Pacific culture. She is a character created by Disney, a multinational corporation, and her design was influenced by Polynesian culture. Aspects of her story and appearance are rooted in these cultures, but Moana the character is a Disney creation.

Redbook’s editors and blogger Sachi Feris say otherwise. Their points are worth considering, but I disagree with their conclusions.

Redbook’s editorial board suggested that white kids sit this one out:

“Recognize this: Moana is a really special character to young girls of Polynesian descent who have never seen a Disney Princess who looks like them, just like how Tiana from The Princess and the Frog likely resonated with young Black women who had waited decades to see themselves represented. White girls have plenty of princesses to choose from — there’s Belle, Ariel, Snow White, Sleeping Beauty … you get the idea. If your Caucasian son or daughter doesn’t get to be exactly what they wanted for Halloween, encourage them to take a step back and realize that they’re awash in privileges that the real Moanas and Tianas of the world will likely never see, because the world is full of racist assholes.”

Applause to Redbook for calling an asshole an asshole, but this is a mess. It’s appalling to suggest that kids ought to be limited to admiring – and performing as – characters exclusively from their “own” cultures. How do we expect children to learn about and value other cultures if we limit them to engaging imaginatively with their own ancestral history?

Read that last sentence again. In practice, do we want Ariel, Cinderella, and Elsa costumes to be worn only by white girls? Tiana costumes only by African-American girls? Is a character’s skin color what we want a child to notice first about a Disney princess?

Helping her daughter choose between an Elsa and Moana costume, Feris explained that:

“Elsa is an imaginary or made-up character. Moana is based on real history and a real group of people…if we are going to dress up [as] a real person, we have to make sure we are doing it in a way that is respectful. Otherwise, it is like we are making fun of someone else’s culture.”

This is not accurate. Moana is not a real person. Motonui is not a real island. Moana’s story and appearance are based on “a real group of people,” but this is true of all Disney princesses, whose stories are built from culturally- and geographically-specific folktales. Polynesian people are real, but so are Norwegian people. Elsa’s physical appearance was inspired by (Disney’s poor understanding of) the Sami people, her costume was inspired by the Norwegian art of rosemåling, and the film’s design has firm Norwegian roots. Similarly, Merida’s design borrows from Scottish history, Cinderella’s and Belle’s from French, Rapunzel’s from Polish and German, Tiana’s from Southern African-American and Creole…and so on.

Instead, Feris suggested her daughter create a costume using materials created by Polynesian artists and dress as “Moana’s sister.” I’m not suprised that Feris’ daughter rejected this suggestion out of hand, because Feris missed her daughter’s point: the little girl didn’t want to be a Polynesian, she wanted to be Moana – and she instinctively made the better decision.

I also have a five year-old daughter. At my house, we use the following question to set the Threshold of Costume Acceptability:

Are you dressing as

(b) a group of people who are being compressed into a monolithic description by your costume?

Moana fits into (a) because she’s a specific character with whom my (white-and-asian) daughter feels a specific connection. By contrast, dressing as an unnamed Polynesian girl fits into (b), and the latter wouldn’t be acceptable.

The Chasing Fireflies catalog can be (horrifyingly) helpful here, because they have plenty of racist costumes. My daughter and I went through the print catalogue image-by-image and talked about why some were acceptable and others were not. For example:

The Indian Maharani Princess costume is some racist bullshit. No, she cannot put on a sari, bindi, and bangles and call herself a maharani. We’re talking about centuries of history and a whole continent. Which maharani? From which period? From which part of India?

Fancy Fortune Teller is a misdirection for “gypsy.” No, you cannot dress like a member of the historically-persecuted Roma.

Native American Princess is also unacceptable. Which tribe? Which time period? Which princess? Want to be Pocahontas or Sacagawea? Get ready to read some books, kid, because you better understand her story backwards and forwards, or you’re not going to satisfy the threshold above. Also, your costume will be historically accurate or you won’t leave the house in it.

I see two issues with Maui costumes: (1) the skin color and (2) the tattoos.

I wish Disney had issued the costume it eventually pulled with transparent fabric. Putting a white kid in a brown shirt is a version of brownface. Once that step is taken, a related-but-separate tradition of white folks dressing as other members of other races in order to denigrate them is invoked. That history exists, can’t be separated, and that white kid participates in that history when s/he puts on the brown shirt.

But, as long as s/he isn’t engaging in brownface, I think it’s OK for a kid to dress as Maui, including wearing his tattoos. Again, this fosters admiration for characters from other cultures; plus Maui is a mythical demigod, thereby pushing his character further into abstraction; and I’m not opposed to cross-cultural tattoos in theory. These tattoos often don’t play out well in practice because people fail to do the research and make the necessary commitment to the originating culture – they lift the visual without engaging with the history. (If an artist copied your “Maori” tattoo from a design you found on the internet, then I have no time for you.)

In Maui’s case, Disney’s film (subtly) explains the rich history of Pacific tattooing, depicting the chisel and mallet process and using Little Maui to explain the interconnections between personal history, cultural symbol, and final design that are intrinsic to these tattoos. A kid really can’t dress up as Maui without his specific tattoos, and to do so would potentially be less, rather than more, respectful of that character and that history.

Yes, but. The best part of the Redbook post is (predictably) a quote from an actual Fijian.

“Emmaline Matagi suggests using a kid’s desire to be Moana or Maui as an opportunity to teach them about actual Polynesian culture. She concedes that she understands why kids would want to dress as Moana, but instead suggests that they make their own outfits, without attempting to recreate “designs [they] think are Polynesian.” After all, she writes, “my culture is not a costume.”

Matagi is right – her culture is not a costume. But Moana and Maui are not entirely products of her culture – they are Disney characters. I love the idea of kids making their own outfits, but don’t trust American parents to take the time to teach their kids about Polynesian culture and create a proper substitute for the Disney version. Without that investment, the kid may fall into wearing culture-as-costume. Plus, even Matagi is OK with you buying a licensed Disney costume and popping Jack or Jane into it.

Go for it, but read about real Polynesian history, as well. Talk about the way the outfit helps Moana sail. Talk about the shapes and symbols present in Maui’s tattoos, how and why they literally represent his life story. Buy an Opetaia Foa’i CD that isn’t the Moana soundtrack. If they’re going to get into the costume, help them get into the culture, too.